My daughter had a job gave out flyers recently. Flyers meaning advertisement brochures. She stood in a busy town area for a couple of hours and handed out flyers to as many passersby as she could. The trick was to make them want to take it, and once you’ve handed out all your flyers, your job is done.

She shared a number of interesting observations, and I have her permission to share them here.

– generally the men will walk slower, they’re nicer, and will stop if you talk to them, and take a flyer

– to increase your chances with the women, turn the flyer to the part with the pearl necklace, push that forward and say “Discount!”

– dating couples are interesting, the guy is easily distracted by you and wants to look at what you have; but she doesn’t

– older folk… always take a flyer. Put it carefully in their bags. To read later, and maybe like grandma, they’re collecting

There was this older gentleman who became pensive and said wistfully, “My mother long gone…”. My daughter suggested, what about your wife? He gave a start and said, “Oh ya..”. He took a flyer.

Mother’s Day is celebrated in Singapore this year on 11-13 May. I’ve been told it is celebrated on different days around the world. Wherever you are, and if you are mother, mama, mummy, mom, Mum, ibu, mak, dad, husband, son, daughter, here’s wishing you… 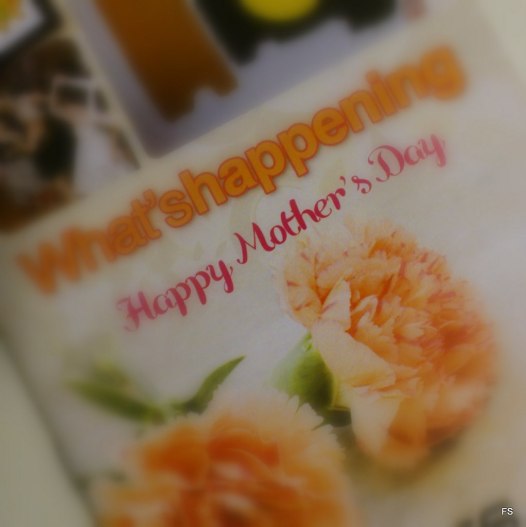 Earlier this year, I decided to treat mom to a nice haircut. She had not had a proper haircut for several months, and was self-colouring her white hair not very successfully.

Anyway, we went to a pretty posh salon and I checked the price, then told the staff she was only there for a cut and colour and nothing extra, and left her there while I ran errands. Unfortunately, when it was time to pay, I discovered they had topped up an extra $30 for a “special treatment”. The stylist looked rather nervous when I asked mom if she had agreed to it, but nevermind.

Now the whole bill was $196, and mom tried to pay for it with the $150 she had in her purse. I think this is one indication of the loss of money sense.

On the way home, mom chatted excitedly about the stylist, where he’s from, how many children he has and how she advised him how to live his life.

That evening, my brother visited and we all admired mom’s new hairstyle. It was extremely expensive, she told him. How much was it? we asked. She thought for a while, and said “Forty dollars!”